This is a really important set of ideas. Neurons scaling their inputs to maintain stability is essential, and relieves many of the stability problems you get when trying to run simulations.

Dark side of LTP - enhancing a synapse will make it more likely to make a neuron fire. This will further enhance the synapse, creating a positive feed-back loop. Theoreticians have suggested that there must be plasticity mechanisms that counteract the destabilizing forces. Synaptic scaling is such a mechanism: Neurons sense their activity, integrate over some time-scale, and multiplicatively adjust their synapes globally to adjust their average firing rate to some set-point.

Scaling allows neurons to normalize firing without changing relative strengths of synapses - thus avoiding disruption of info storage. Inhibitory synapse scale in opposite direction of excitatory synapses. Blocking APs at soma only (via TTX) is sufficient to induce scaling.

Scaling operates on both AMPA, and NMDA. Main mechanism is AMPA. Requires transcription - either produces more AMPA overall, or alters scaffolding proteins. Lots of possible molecular pathways. One of the ways to design the homeostatic feedback loop is with a calcium detector. Then this regulates the synaptic strength to reach a calcium set-point. Lots of other pathways: BDNF, TNFalpha, CAMKII). Not clear if there are several different types of pathways, or if these are interacting in a single pathway.

Scaling is important during development, seen in visual system. In layer 4 scaling turns off after the first postnatal week, and turns on in layer 2/3, where it can be induced into adulthood. Likely part of mechanism that alters responsiveness of neurons during visual blockade of one eye.

Scaling up vs. scaling down may have different mechanisms. Instead of one factor detecting deviations around the set point, there are 2. One detects above and then triggers the scale-down cascade, and the other detects below and triggers scale-up cascade. 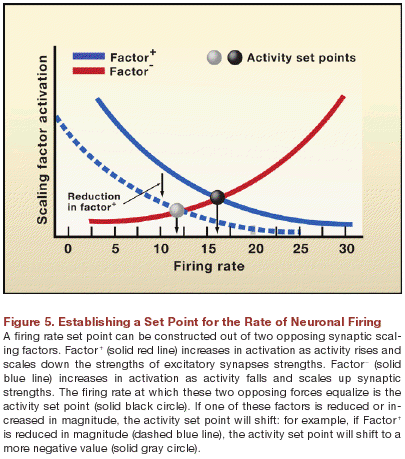