Recordings in PFC and a thalamic nucleus (nucleus medialis dorsalis). They found some neurons that have persistent activity: 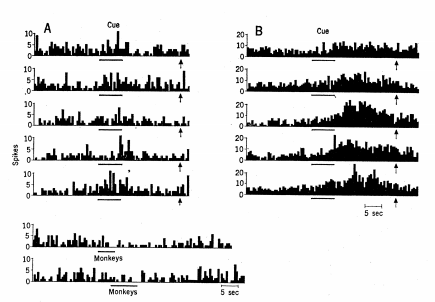 Fig 2. Frequency histogroms (0.5-sec bins) of two units (A and B) in pfc during five trials with 18-second delays. Cue presentation periods marked by horizontal lines. Arrows mark the lifting of the blind and unlocking of doors which terminate the delay and immediately precede the animal's response. The two lower excerpts from the unit at left (A) represent tests of stereo tape-recorded cries of monkeys at the time of their daily feeding played back to the experimental animals by means of overhead loudspeakers.

Delayed match to sample task. Recorded in PF and IT. More than half of PF neurons show delay period activity increase. There's some interesting insights into the encoding scheme -- i.e. using projections of large numbers of neurons to represent the information, as there is a lot of variability in the type of delay activity. 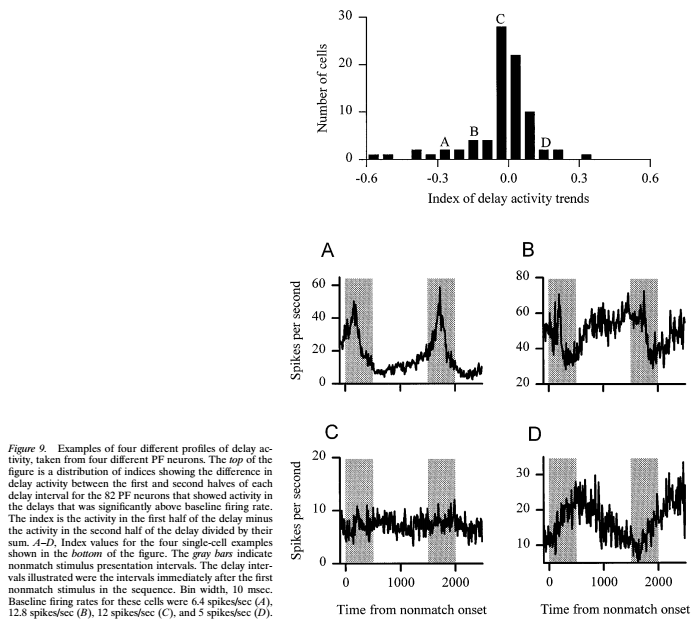 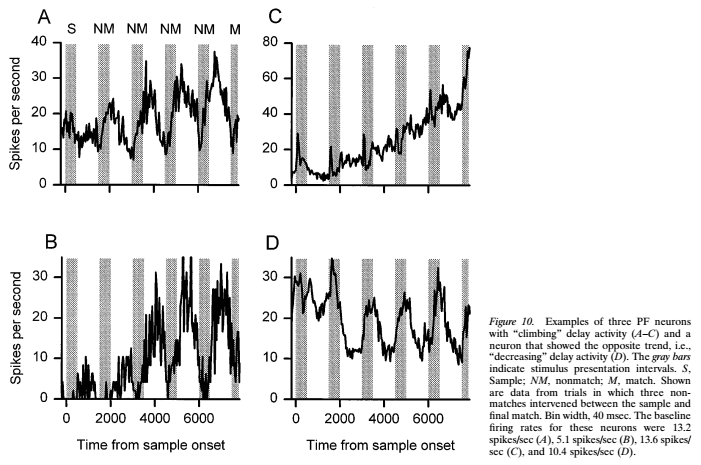 Recorded from a bunch of single-units in hippocampus during delay task. 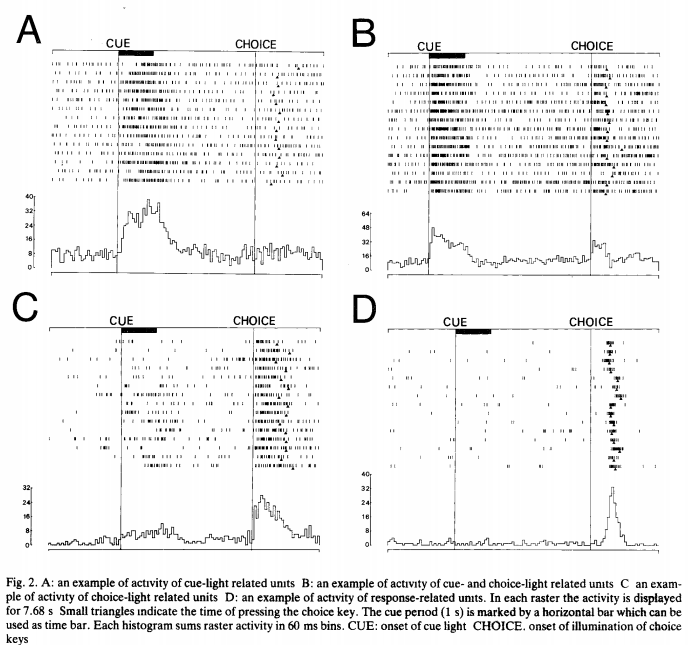 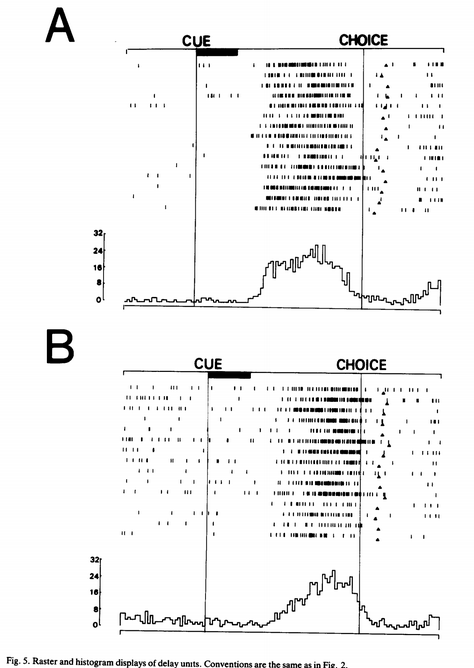 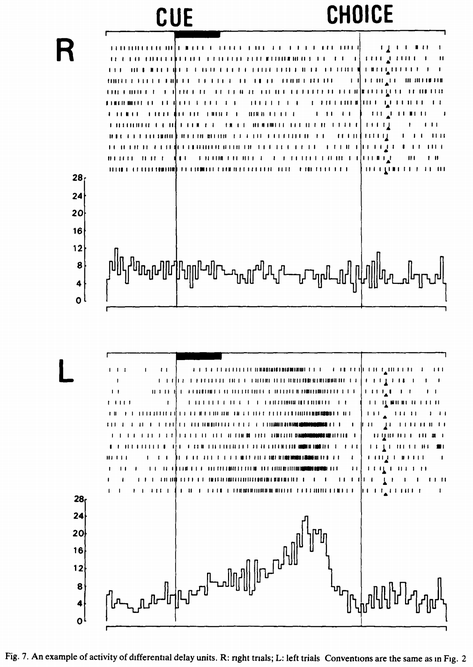 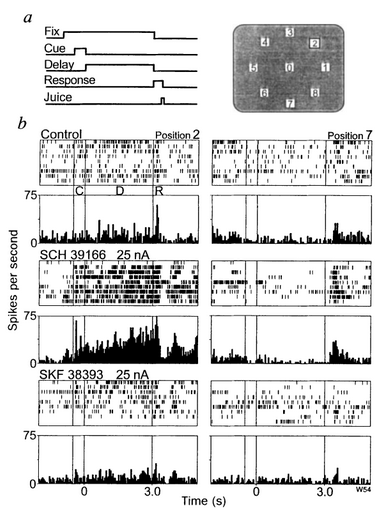 FIG 1. a, Left, schematic sequence of events in each phase of the ODR task (aligned in time with rasters and histograms shown immediately below); right, depiction of the 8 positions of the target (plus the central fixation position, 0) to be remembered for guidance of oculomotor response. b, Effect of SCH 39166 on response of neuron W54 (raster-gram above, histogram below; bin, 50 ms) for a target (position 2) in the memory field (left) and for a target (position 7) in nearly the opposite location in space (right). Top two rows, control recording showing significant but weak delay activity. Middle two rows, SCH 39166 (25 nA) produces dramatic enhancement of activity during the delay period when the target is in the memory field but produces an inhibition of activity when the target is in position 7. Bottom two rows, SKF 38393 reverses the effect of SCH 39166 and reduces delay activity to 'back-ground' level. C, cue period; D, delay period; R. response period.

So, this looks like SCH 39166 (D1 antagonist) is enhancing the "gain" of the memory field, while SKF 38393 (partial D1 agonist) reduces/eliminates the delay period activity.

"It has been shown that D1 receptors are located preferentially on the distal dendrites and spines of pyramidal cells, but D5 receptors can also be observed on spines as well as dendritic shafts": Smiley, Levey, Ciliax, Goldman-Rakic PNAS 1994; Bergson C et al. Soc Neurosci Abstr 1994. (I think this became this paper).

"The enhancement of neuronal activity by D1 antagonists and its reversal by SKF 38393, a D1 agonist, indicates that the normal activiation of dopamine is to constrain neuronal activation during performance of a working memory task. Such an inhibitory role for dopamine is fully in accord with numeraous previous physiological studies [38]. A known mechanism of inhibition by D1 action is the attenuation of a slow inward sodium current which normally supports activation of the cell by excitatory inputs [39]." 38: Thierry, Mantz, Milla, Glowinski, J. Ann. N.Y.Acad.Sci. 1988; 39: Calabresi et al Neuroscience, 1987. 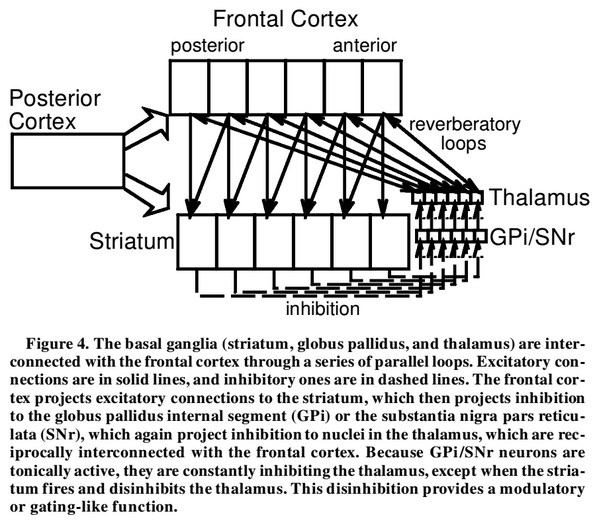 the basal ganglia are important for initiating the storage of new memories.

Working memory is attractor states -- in their model the recurrence for the attractor is between PFC and thalamus and back. [why not local circuitry?]. They then talk about this information relationship between thalamus and frontal, and that thalamus would need same order of neurons. However, this is avoided with the recurrent connections in frontal. [thalamus is compressed representation, potentially "blurrier", more information is stored in the recurrent PFC connections].

Possible mechanisms: Dilmore, Gutkin & Ermentrout 1999; Durstewitz, Seamans, & Sejnowski, 2000b; Fellous, Wang & Lisman, 1998; Gorelova & Yang, 2000; Lewis & O'Donnell, (2000) show that prefrontal neurons exhibit  bistability -- they have up and down states. Other mechanisms take advantage of the properties of the NMDA receptor. Wang 1999, bistability emerges as a result of interactions between NMDA channels and the balance of excitatory and inhibitory inputs. Durstewitz: dopamine modulates NMDA channels and inhibition to stabilize a set of active neurons.

"To summarize, in our model, active maintenance oper- ates according to the following set of principles. 1. Stimuli generally activate their corresponding frontal representations when they are presented. 2. Robust maintenance occurs only for those stimuli that trigger the intracellular maintenance switch (as a re- sult of the conjunction of external excitation from other cortical areas and Layer 4 activation resulting from basal- ganglia-mediated disinhibition of the thalamocorticalloops). 3. When other stimuli are being maintained, those representations that did not have the intracellularswitch activated will decay quickly following stimulus offset. 4. However, if nothing else is being maintained, recurrent excitation is sufficient to maintain a stimulus untilother stimuli are presented. This “default” maintenanceis important for learning, by trial and error, what it is relevant to maintain."

"An interesting possible candidate for the regions of the frontal cortex that are independently controled by the basal ganglia are distinctive anatomical structures con- sisting of interconnected groups of neurons, called stripes (Levitt, Lewis, Yoshioka, & Lund, 1993; Pucak, Levitt, Lund, & Lewis, 1996). Each stripe appears to be isolated from the immediately adjacent tissue but interconnected with other more distal stripes, forming a cluster of inter- connected stripes. Furthermore, it appears that connectivity between the PFC and the thalamus exhibits a similar, although not identical, kind of discontinuous stripelike structuring (Erickson & Lewis, 2000). Therefore, it would be plausible that each stripe or cluster of stripes constitutes a separately controlled group of neurons;" -- there could be 20K stripes or 5K stripe clusters.

"One particularly intriguing suggestion is that the convergence of inputs from other frontal areas may be arranged in a hierarchical fashion, providing a means for more anterior frontal areas (which may represent higher level, more abstract task/goal information) to appropriately contextualize more posterior areas (e.g., supplementary and primary motor areas; Gobbel, 1997). This hierarchical structure is reflected in Figure 4."

"This notion fits well with the ideas of Fuster (1989), who suggested that the frontal cortex sits at the top of a hierarchy of sensory–motor map- ping pathways, where it is responsible for bridging the longest temporal gaps. This hierarchy can continue within the frontal cortex, with more anterior areas concerned with ever longer time scales and more abstract plans and concepts (see Christoff & Gabrieli, 2000, and Koechlin, Basso, Pietrini, Panzer, & Grafman, 1999, for recent evi- dence consistent with this idea)." 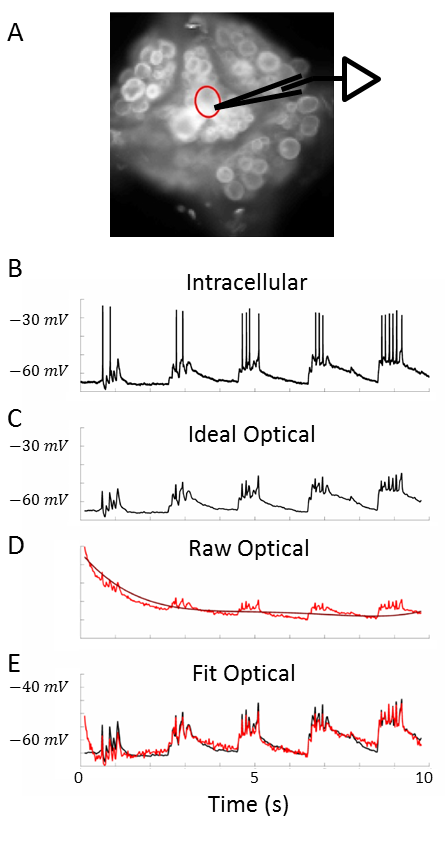 Figure 1: Calculation of Signal-to-Noise Ratio (SNR).
(A) Simultaneous optical and electrophysiological recordings of several cells under several different conditions %(pre-synaptic chemical stimulation, pre-synaptic gap-junction stimulation, spontaneous activity, swimming). (B) Raw intracellular voltage trace. (C) The Voltage trace is down-sampled to the optical frequency based on a method that mimics the optical sampling mechanism. (D) The raw optical trace is shown in red and a polynomial is used to fit the optical trace to the ephys trace (dark red). %The polynomial removes bleaching artifact. (E) The fit optical trace is overlayed on the ideal optical trace. (F) The SNR is calculated as the standard deviation of the Ideal trace divided by the standard deviation of the difference between Ideal and Fit (i.e. the residuals). 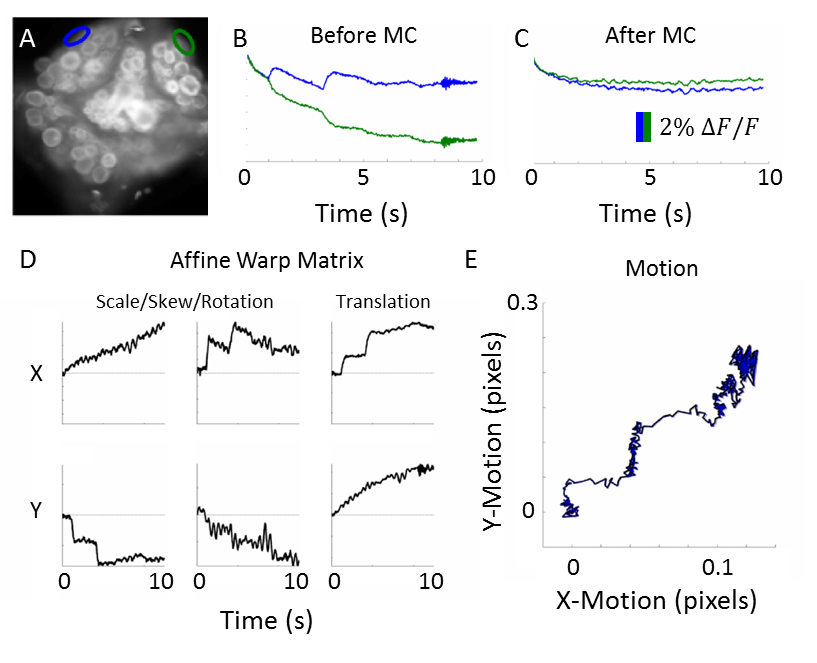 Figure 2: Sub-pixel motion correction with ECC.
(A) Raw image of ganglion stained with VSD with two ROIs at the edge of the ganglion. (B) Sub-pixel motion artifact is apparent and large compared with VSD signals. (C) Motion artifact can be removed with ECC image registration algorithm. (D) The registration algorithm performs an affine transformation of the pixels. Each panel corresponds to the warp matrix values over time. (E) The resulting motion artifact that is removed. The separation of blue and black highlights the impact of the skew and rotation values of the affine transformation 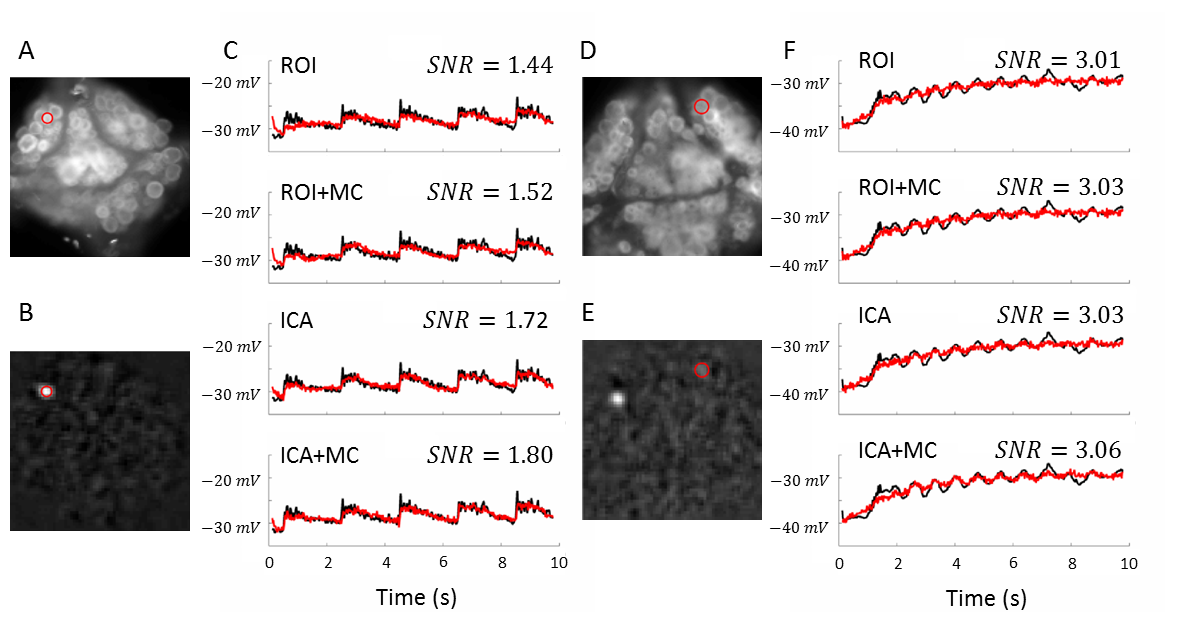 Figure 3: Comparison of ROI and ICA based signal extraction.
(A) Raw image with red ROI shown during pre-synaptic stimulation. The optical signal is the average of all pixels within the ROI for each frame. (B) ICA pulls out a component that is manually selected coming from the same cell. The ROI is shown on top to compare localization of component and hand-drawn ROI. (C) The Fit trace is overlayed on the Ideal trace for 4 conditions: ROI only, ROI with Motion Correction (ROI+MC), ICA only, and ICA with Motion Correction (ICA+MC). (D) Raw shown during swim behavior. (E) ICA component. This component shows weight in the bi-lateral pair of cells, as these cells are highly correlated. (F) SNR is compared under the 4 conditions. The 5 mV oscillation are much more clear in the ICA+MC case, even though the SNR increase is fairly small. 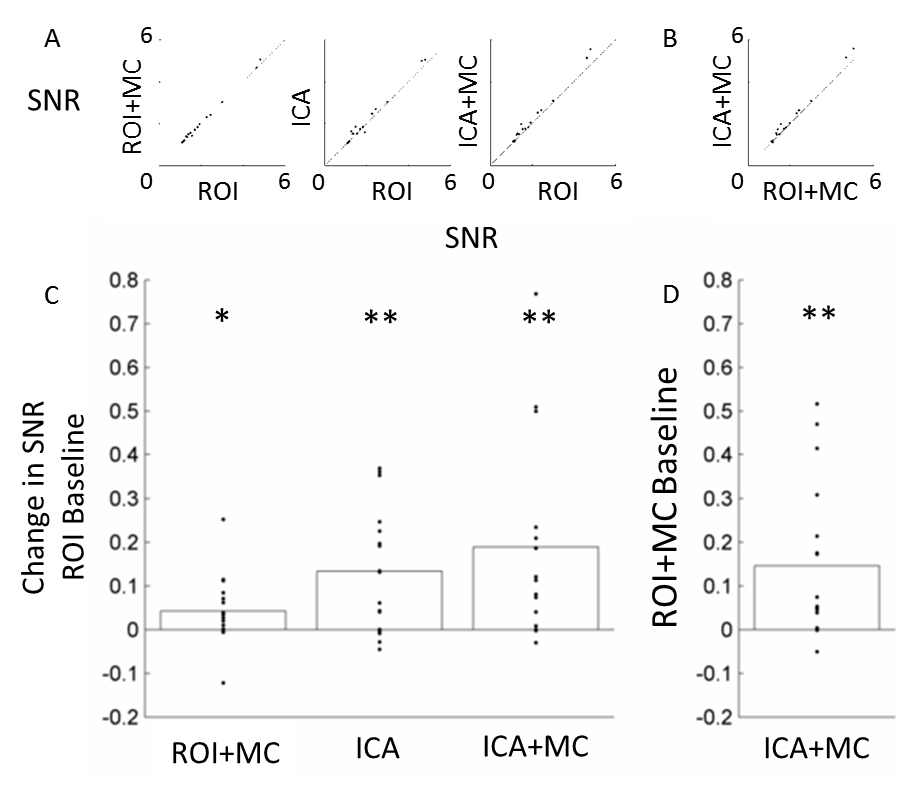