Gain control by layer six in cortical circuits of vision

This is from Massimo's lab. He is on my committee and one of my favorite scientists. Shawn Olsen is a friend, he's also really good.

They target L6 excitatory neurons with genetic line, approx 65% of population is labeled. L6 neurons can be divided into two categories: apical dendrites that end in L4, and apical dendrites that end in L1. Project to the dLGN and nucleus reticularis (NRT). Non-expressing cells were morphologically distinct. Expressed ChR2, linear multi-channel probe to record across vertical depth.

Drifting gratings. Activation of L6 supressed activity throughout depth, reduced spontaneous activity. Photostimulation scaled the tuning curve (multiplicative gain), did not change preferred orientation, tuning width, or the orientation selectivity index in all other layers. Also photosuppressed L6 with Halo-rhodopsin and the tuning curves scaled up. 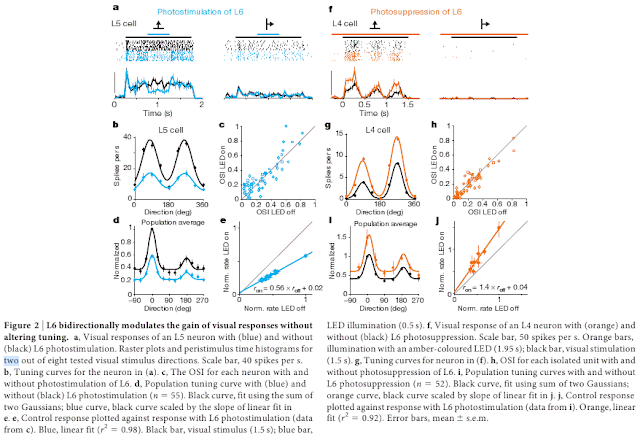 Remember that they are activating a big chunk of the population of L6 with light. So this scaling results when a large amount of the population is being excited. The suppression is a good control, as they are turning off the L6 neurons that are active for the stimulation. This is still very broad, however.

L6 activation suppresses activity in dLGN. Mainly through disynaptic inhibition onto dLGN relay neurons - recruitment of NRT inhibitory neurons and possibly local inhibitory interneurons in dLGN. Suppression of cortex as a whole (by photostimulating PV inhibitory neurons), strongly facilitated dLGN. (This negative feedback from cortex to dLGN is part of the idea that cortex is building a model, and sending back to LGN what it thinks the pixels should look like based on the model. This suppresses LGN in all of the places in which cortex's model is correctly predicting the pixels. The errors of the prediction are sent back to cortex to refine the model, and also will signal for plasticity).

L6 can inhibit all layers of cortex through local circuits without going through LGN. Mainly targets neurons within column, falls off as stimulation moves away from target neuron tangentially. 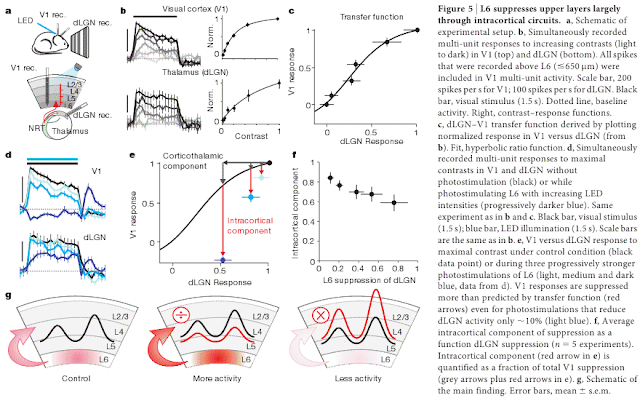 So, a big key to how cortex works is the feedback control of multiplicative-like inhibition and additive-like excitation. The excitatory neurons represent the information through their tuning curves, and the population is normalized by the inhibitory neurons. The mulitplicative normalization allows the neurons to have the same population-code, but can stabilize the activity across cortex.