Ed Callaway is a prof at Salk, this is who Tina used to work for. 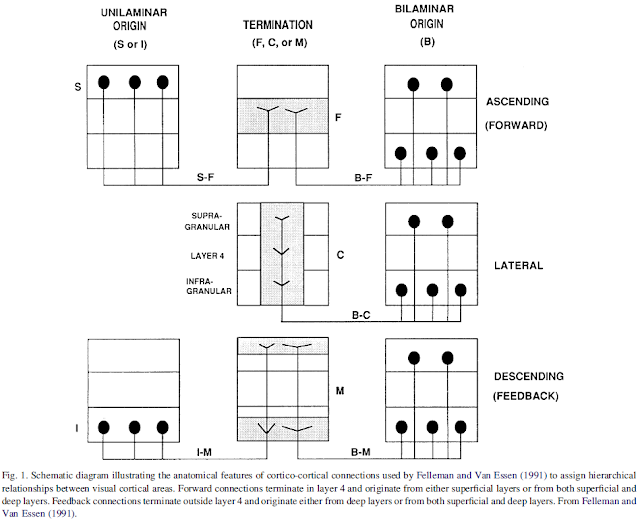 Two step process feedforward goes to layer 4, layer 4 mainly projects to L2-3, then off to next cortical region. Layer 6 acts modulatory and feeds back mainly on layer 4. Layer 5 does the same for layer 2-3: 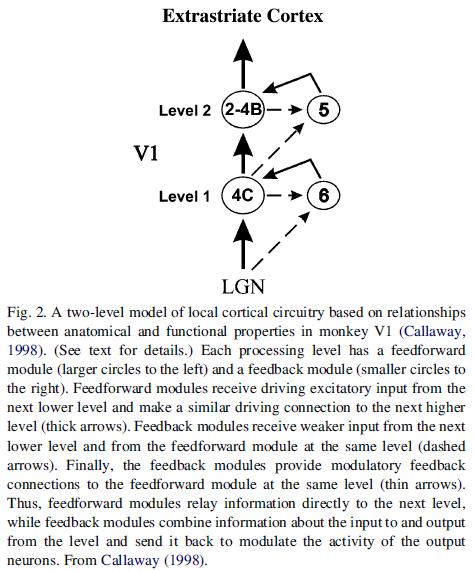 Based on the lack of specificity of the connections from deep layers he infers that the deep layers are mainly modulatory on the superficial layers. There's a scanziani paper that shows how layer 6 modulates gain of the other layers, another paper to review. This is an interesting take on the seperate function of the two sheets of cortex. Remember that the superficial cortex is more pattern-completing (lots of feedback connections).
Cortical areas can also interact by going through thalamus. Each cortical area has a thalamus (roughly), and lower cortical areas will project up to the next level of thalamus. The higher level of thalamus will then project to higher cortical areas. This continues up the hierarchy. So there is both a cortical and thalamic hierarchy where information spirals up. (This is like basal ganglia as well).
There are some shortcuts from thalamus to higher cortical areas. LGN signals may be able to skip layer 4 and layer 2/3 pathway, and route through layer 6 directly to higher areas. This may be special for vision, as the evidence for this shortcut is for motion signals (V1-L6 to MT). This shortcut may be necessary to process motion signals faster, as that would be extremely important.
Fast-spiking basket cells (aka PV cells) control gain. Feedforward connections from thalamus to L4 and from L4 to L2/3 connect strongly to FS cells. Most other inhibitory types are not targeted by feedforward excitation. Mainly target soma and proximal dendrites.
Somatostatin inhibitory neurons (SOM, Martinotti in cortex) inhibit distal apical tufts of pyramidal cells.

Calretinin neurons could be acting as gating cell. They disinhibit L2/3 while simultaneously inhibiting deep pyramids. Could be switching between classical cortico-cortico pathway and cortico-thalamic-cortico alternative pathway. Direct inhibitory synapses onto deep pyramids. Double negative synapses through other inhibitory interneurons for superficial pyramids.
Posted by Unknown at 1:23 PM