This is a nice one of CV. You can see it is slightly lagging the DP oscillation, but I'm not entirely sure that the ganglion is 12. My guess is its 10 and he's recording DP 12, so the DP spikes are a little further behind. 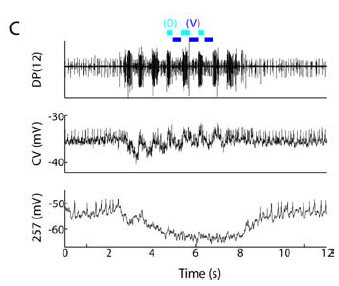 And then he gets some nice simultaneous 208 and 255 recordings. Again this matches really nicely with my data as you can see 255 slightly leading 208. This is reflected in that 255 is in the red phase and 208 is in the purple phase in my data.

Here's the position of 204, which matches nicely 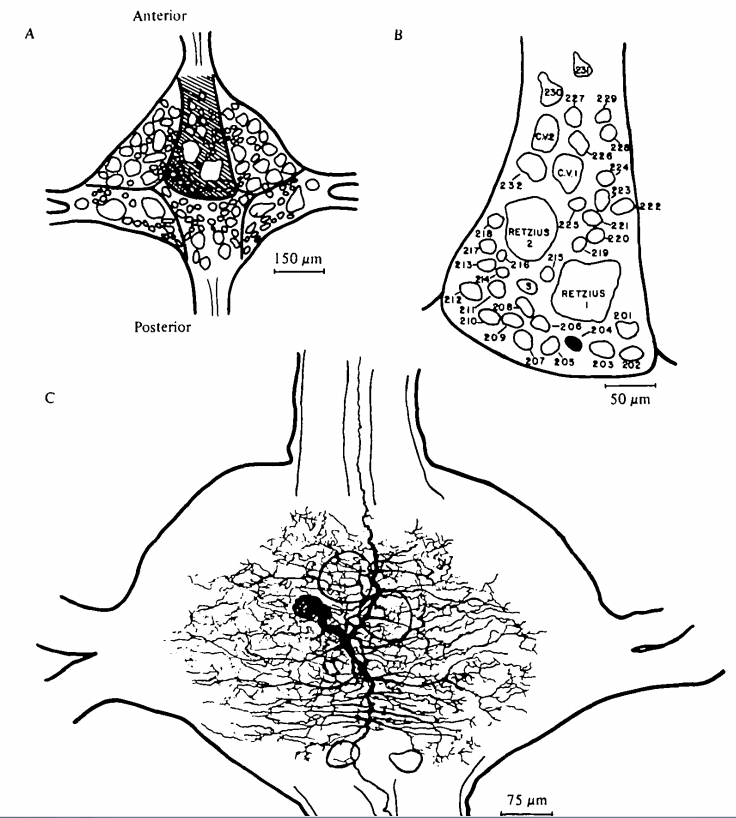 Depolarizing cell 204 leads to the initiation of the swim oscillation. 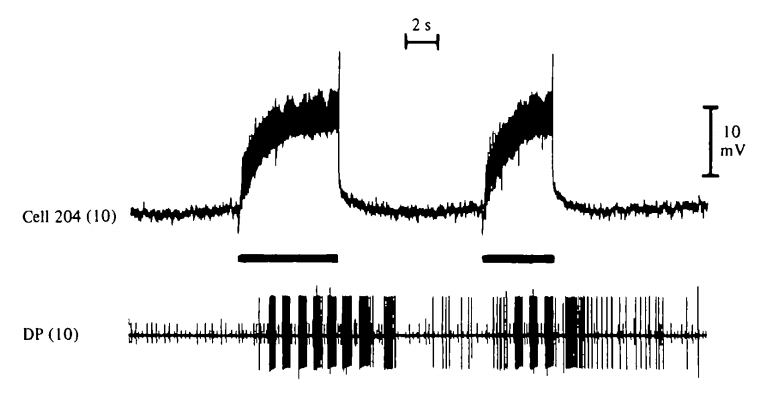 And then here is 204 during swimming

Ok, so I put 204 in the yellow phase, which I think this matches nicely. It is hard to tell because this is DP 12, but you can see how much the phases shift by comparing 204 (10) with 204 (11). The way I have it, 204 is in the yellow phase, which means its depolarization should slightly lead the DP nerve. It would be unclear, because the duty cycle of 204 is pretty long, which can maybe slightly alter the phase, but I'm fairly happy with it.

Another paper from weeks looking at cell 205, which I don't see how to possibly differentiate from cell 204. 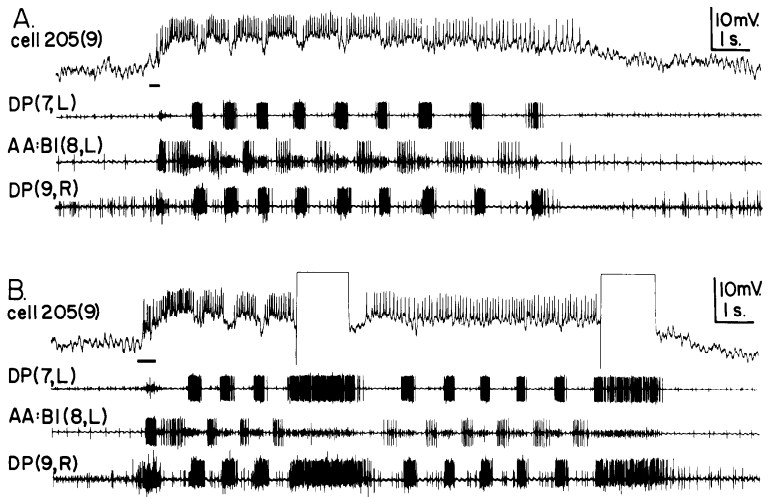 Although, wow it looks like S has a swim oscillation. She is showing that S is connected to cell 205, as well as cell 205 getting a bunch of input from sensory neurons -- sounds like its part of preparatory network.

205 is the only one missing from my data set, but this is only in segment 9 according to Weeks, 1982.
"Unlike other swim neurons which are segmentally repeated, cell 205 generally is present only in segment 9, and numerous lines of evidence suggest that it is, in fact, a segmentally differentiated homolog of cell 204."

This schematic is in a lot of Friesen's papers. I think most of the neurons involved in swimming that Friesen studies, however, are on the dorsal face. 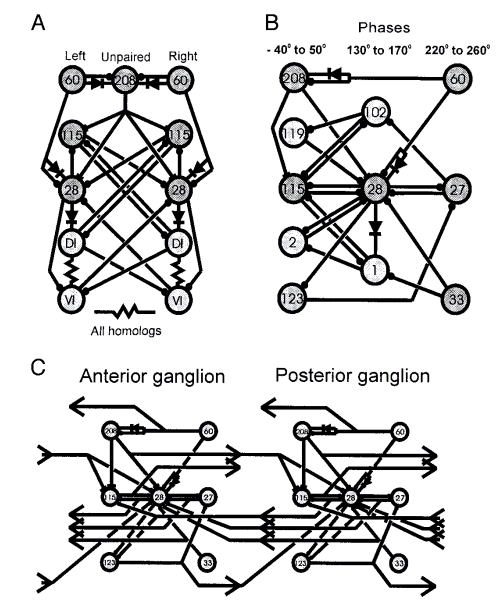 And here's an intracellular of DI-1 during swimming: 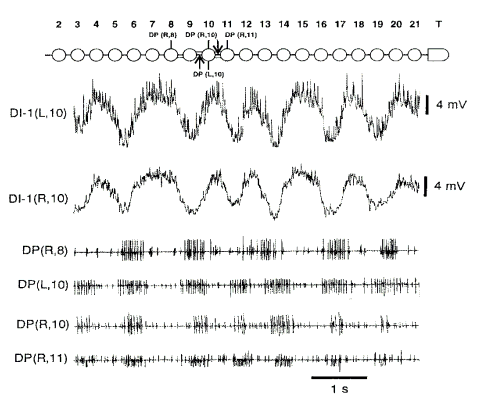 Another one of these phase diagrams from Friesen: 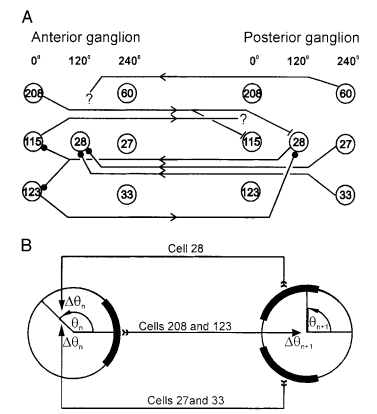 The rest of this paper is about modeling the swim behavior. 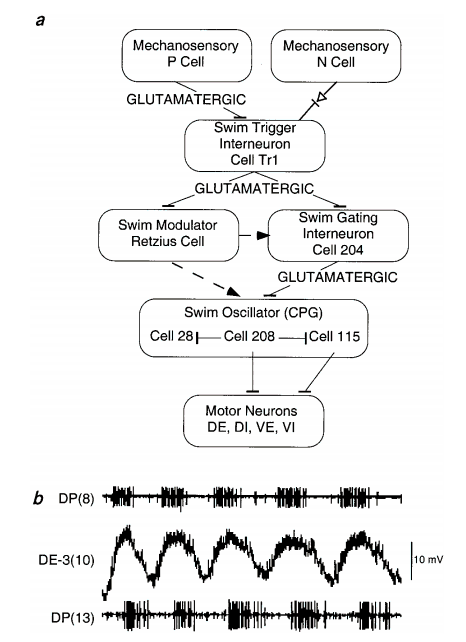 More circuits and recordings. The legend says panel A is from Friesen 1989, and panel B is from Nusbaum 1987, which I need to find.

Not sure what SIN1 is, this is from Brodfuerher and Burns 1995: 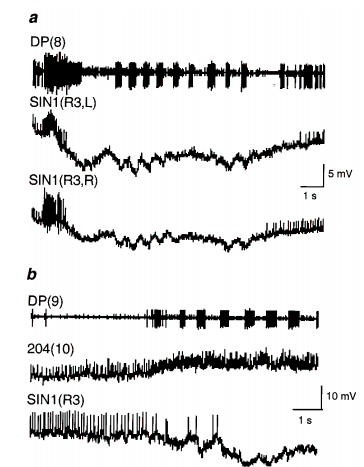 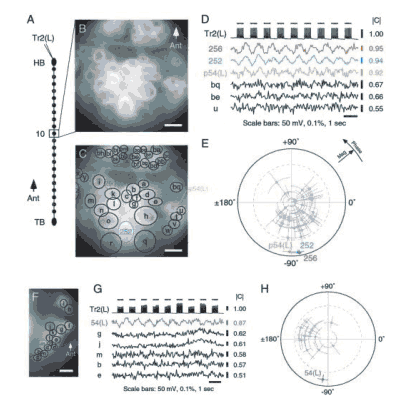 Here are ephys recordings, but it doesnt seem that 256/252 are oscillators

Pretty detailed review. Good source to cite as leech cells being homologous: "Most midbody ganglia have the same neurons and locations of the soma."

7. The nervous system is iterated, with homologous neurons found in most, if not all, 21 segmental ganglia (Fig. 1). So despite having more than 10,000 neurons, the functional unit (i.e. the number of different kinds of neurons) of the leech CNS is relatively small. For instance, there are only 400 neurons per segmental ganglion (Macagno, 1980), and most of these are paired. Thus, in essence, the segmental nerve cord (roughly corresponding to the spinal cord in vertebrates) consists of 42 copies (one on each side of 21 segments) of a basic unit of 200 neurons.

And another version of the circuitry figure, with colors! 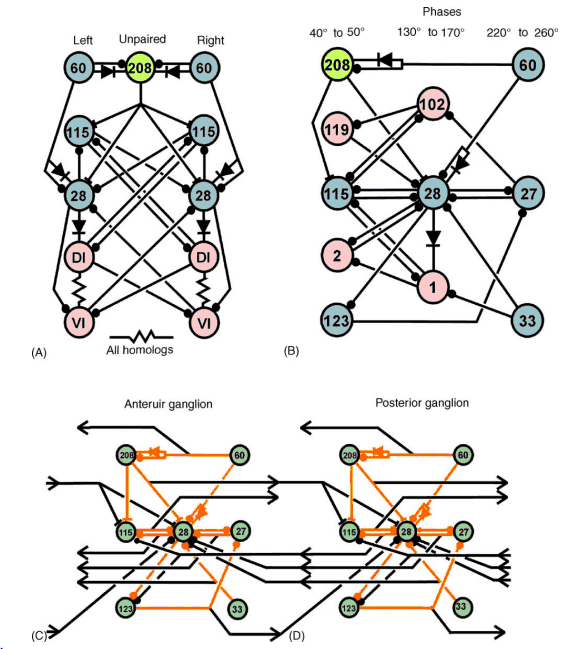 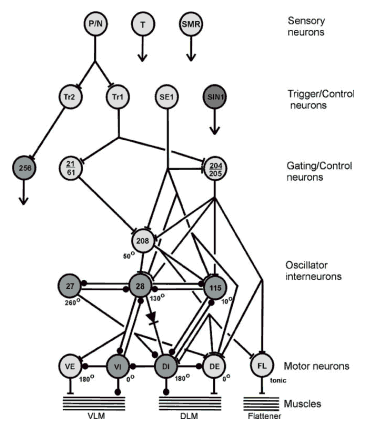 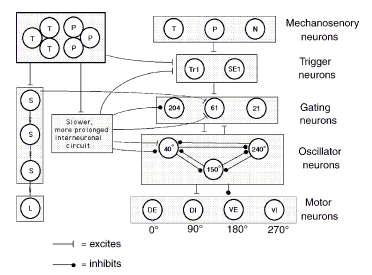 Mostly about Tr1. But here's a CV: 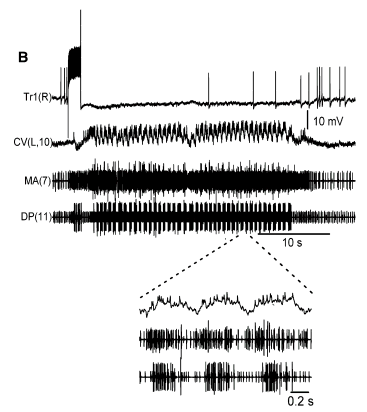 And it looks like Retzius has a clear swim oscillation. Hard to tell its phase from this picture, however. 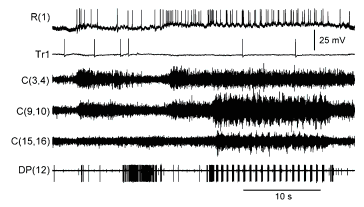 This paper just wanted for this figure to cite the "Do something!" network. 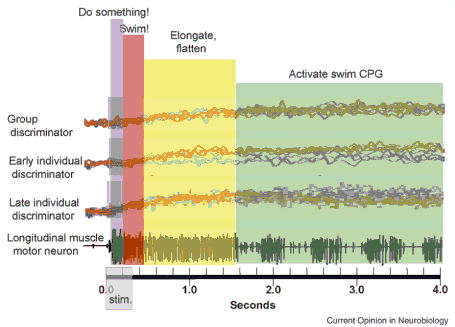 Ok this is Otto's original papers on swimming. The first one is about the motor neurons and their connections: 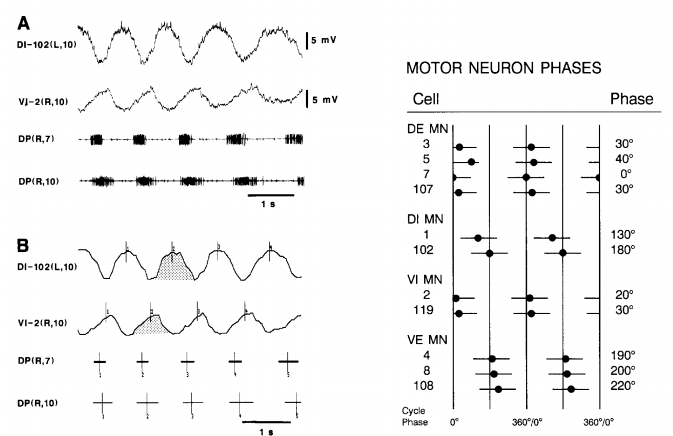 Here's the classic about the motor neuron coupling: 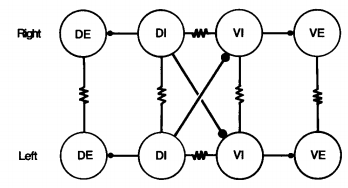 Yeah so most of the diagrams that I'm interested in originally come from this paper. 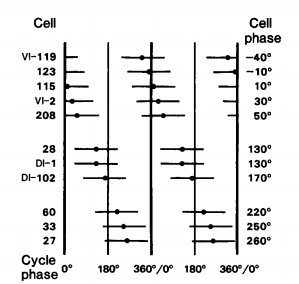 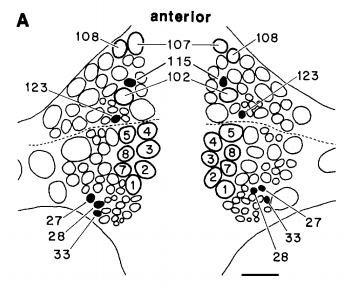 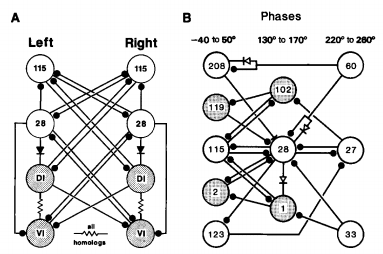 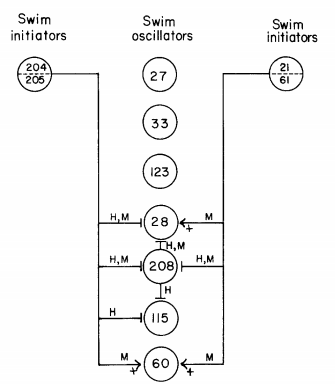 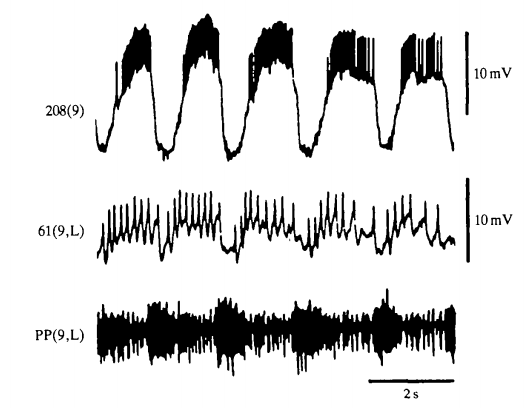 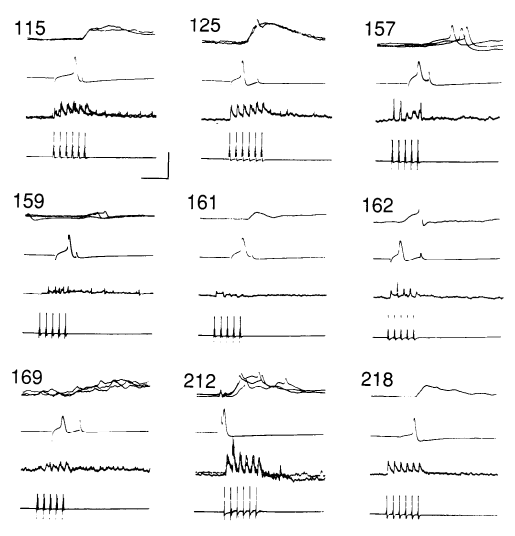 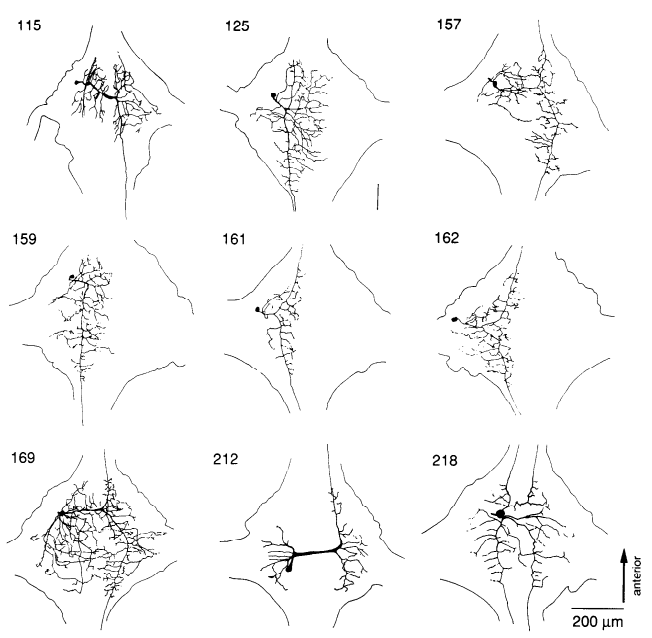 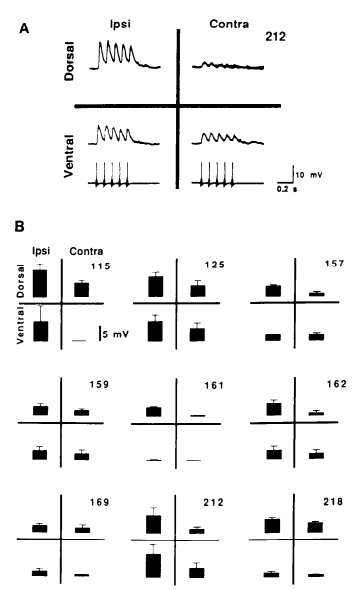 In this paper he labels some cells as cells I have identified, but this is all crawling so it is hard to know for sure if they match. 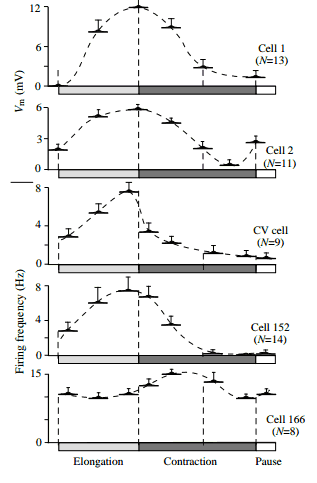 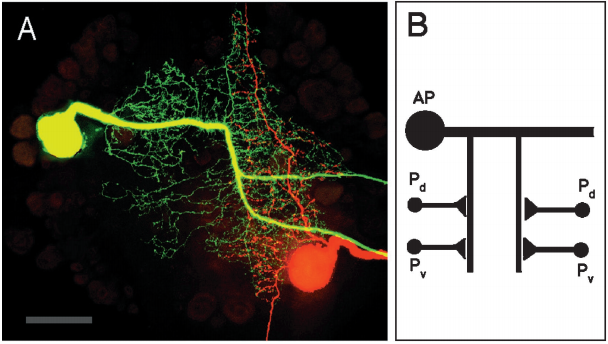 These Wessel papers describe the AP cell. Can cite them as part of "AP cell has unknown function".

Ok, so I think there are a few changes to my table based on this review.