Control of timing, rate and bursts of hippocampal place cells by dendritic and somatic inhibition

In the place field, pyramidal neurons alternate between two distinct modes of discharge: single spikes and bursts of spikes.

Linear treadmill, local cues, place cells form. Silence PV and SOM cells with halorhodopsin in CA1. They classified all the cells based on certain spiking properties, and relation to theta and slow-wave ripples.

Pyramidal cells that have place fields within the segment of the track that was stimulated with light were facilitated when both PV and SOM were silenced. Out of field cells showed no effect, but also had no excitatory drive. PV and SOM have similar effects on spiking changes overall, but have "interleaved" effects - PV changes are largest at beginning of place field, and SOM are largest at end of place field. Consistent with in vitro showing shift from somatic to dendritic inhibition across place fields. 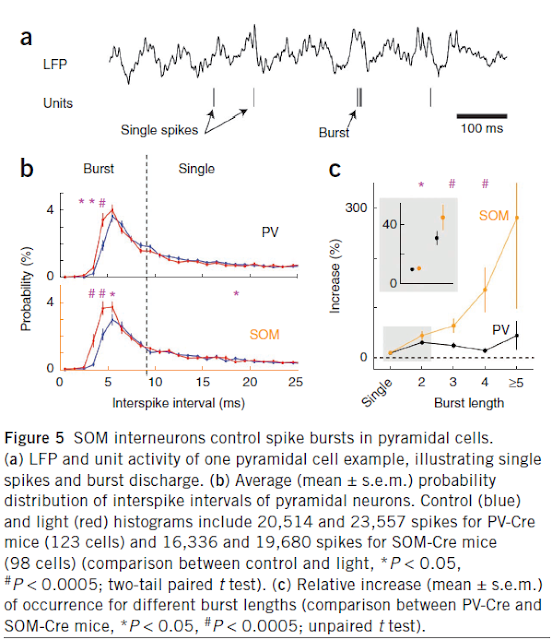 Silencing PV interneurons have a strong effect on spike-timing and theta-phase relationships than SOM interneurons. Spikes were more gathered toward the trough of theta, reducing phase difference between onset and peak of place fields by more than half. 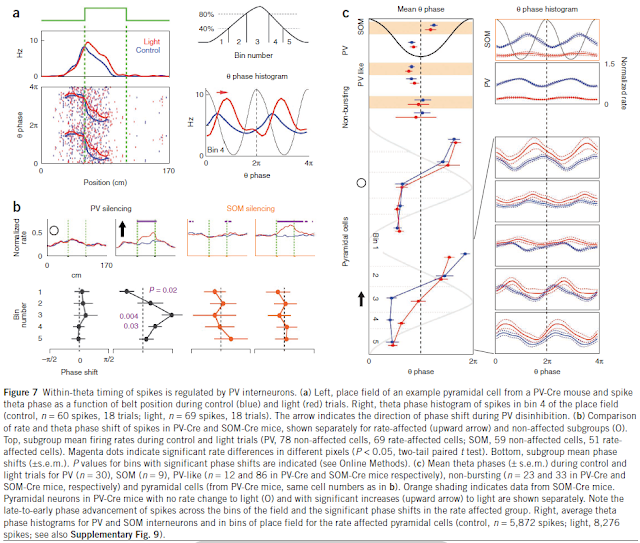 Combination of Gamma and Theta regulate the phase-precession of pyramids. (Where does theta come from?).
Posted by Unknown at 1:28 PM