The phenomenon of "inheritance of parental traumatic exposure".

We've long recognized that the ability to transmit information to offspring about specific environmental features or events would be remarkably advantageous. However, we've only been able to conceive of such "non-Mendelian" modes of inheritance only recently. Since Darwin, we have suspected that the information shared across generations was only crafted by natural selection and that traits were determined by who best reproduced and not through the experiences of the orgnaisms. But new empirical data is showing that epigentics can act as the mechanism to pass down information learned from the environment to the next generation.

Three generation of mice were studied -- F0 were the grandparents and put in 3 conditions: no smells, exposed to acetophenone (smells like cherries), and exposed to propanol (control smell). The offspring of F0 (F1) were then tested to see if they responded to the smell that their parents were conditioned to. The mice responded more to the odor that their parents were conditioned to, but not the other odor, even though these mice were never exposed to either odors. This even extended to the next generation (F2).

Further, F1 mice showed higher sensitivity to the smell that their parents were conditioned with. 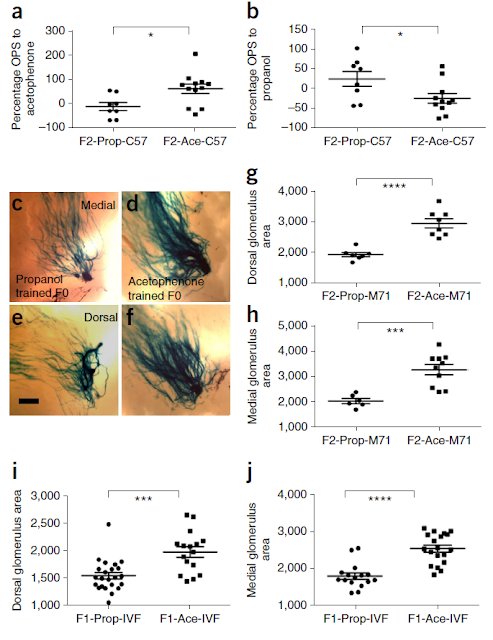 
Finally, they looked at the methylation patterns on the odorant receptor genes in the sperm of the F0 mice. Methylation has been recognized as a potential marker for epi-genetic changes in transcription. There was a significant decrease in the amount of methylation of Olfr151 (which is responsive to acetophone), but no changes in Olfr6 (which is not responsive).

The idea that the experience of ones ancestors can influence behavior has important consequences. This may contribute to an "intergenerational transmission of risk for neurophsychiatric disorders, such as phobias, anxiety and post-traumatic stress disorder".

The fact that changes can propagate over more than one generation has implications for the process of evolution -- the actual experience of the parents altering the genetic makeup of the offspring means we may have to refine the way we think about how evolution works. However, it is unclear if these changes can last for a long enough time (over many generations) to truly alter evolution, as methylation patterns may not be stable enough for natural selection to have a long-term influence. But there could be mechanisms that can incorporate epi-genetic changes into the genome.
Posted by Unknown at 1:35 PM No comments: